No calibration. Top up the spreader hopper up and off we go! There is nothing simpler. 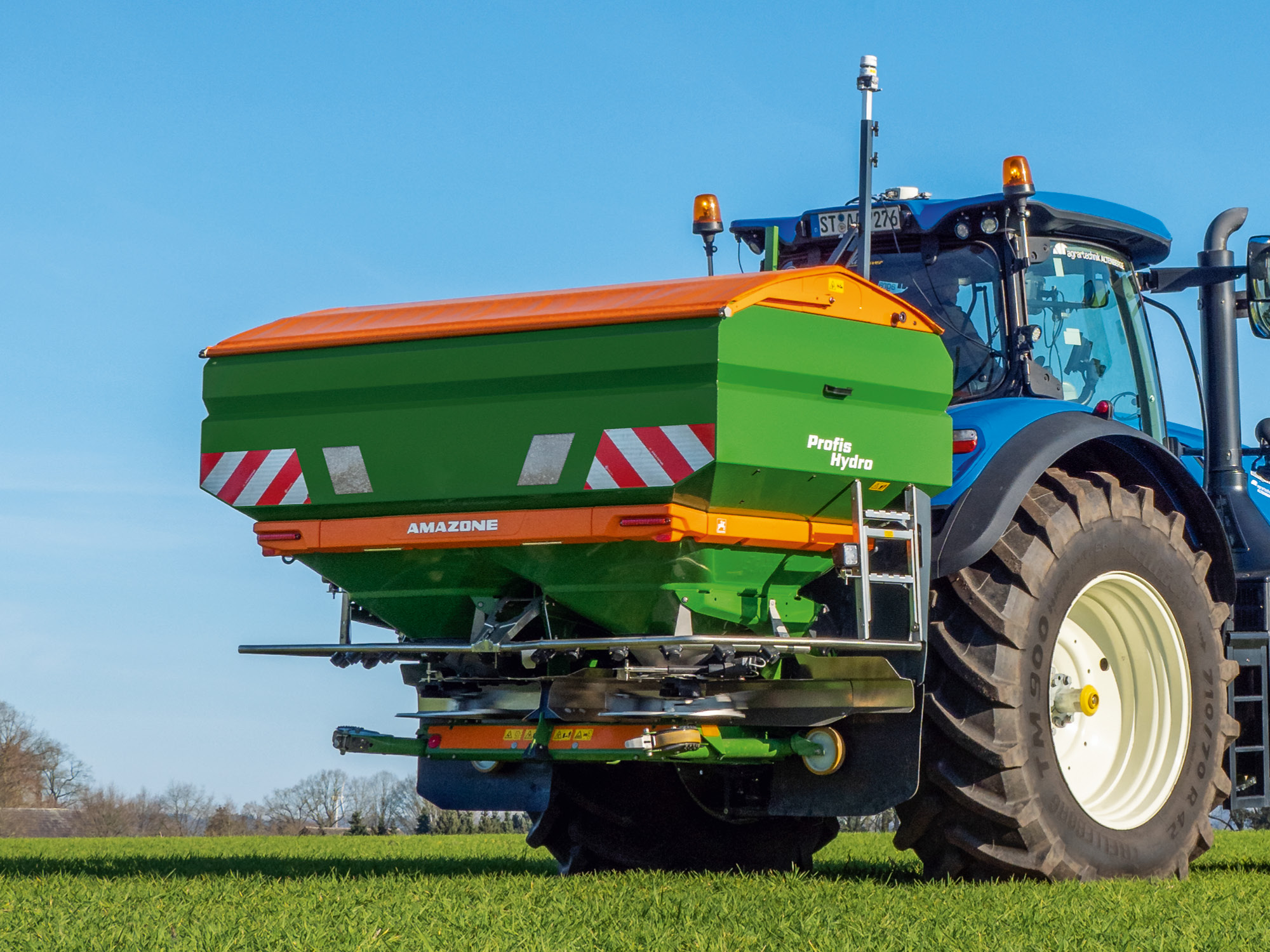 In addition, the application rate can be altered at any time by pressing a button on the ISOBUS terminal.

Compact tractor mounting
The advantages
Regulating/calibrating under all operating conditions: 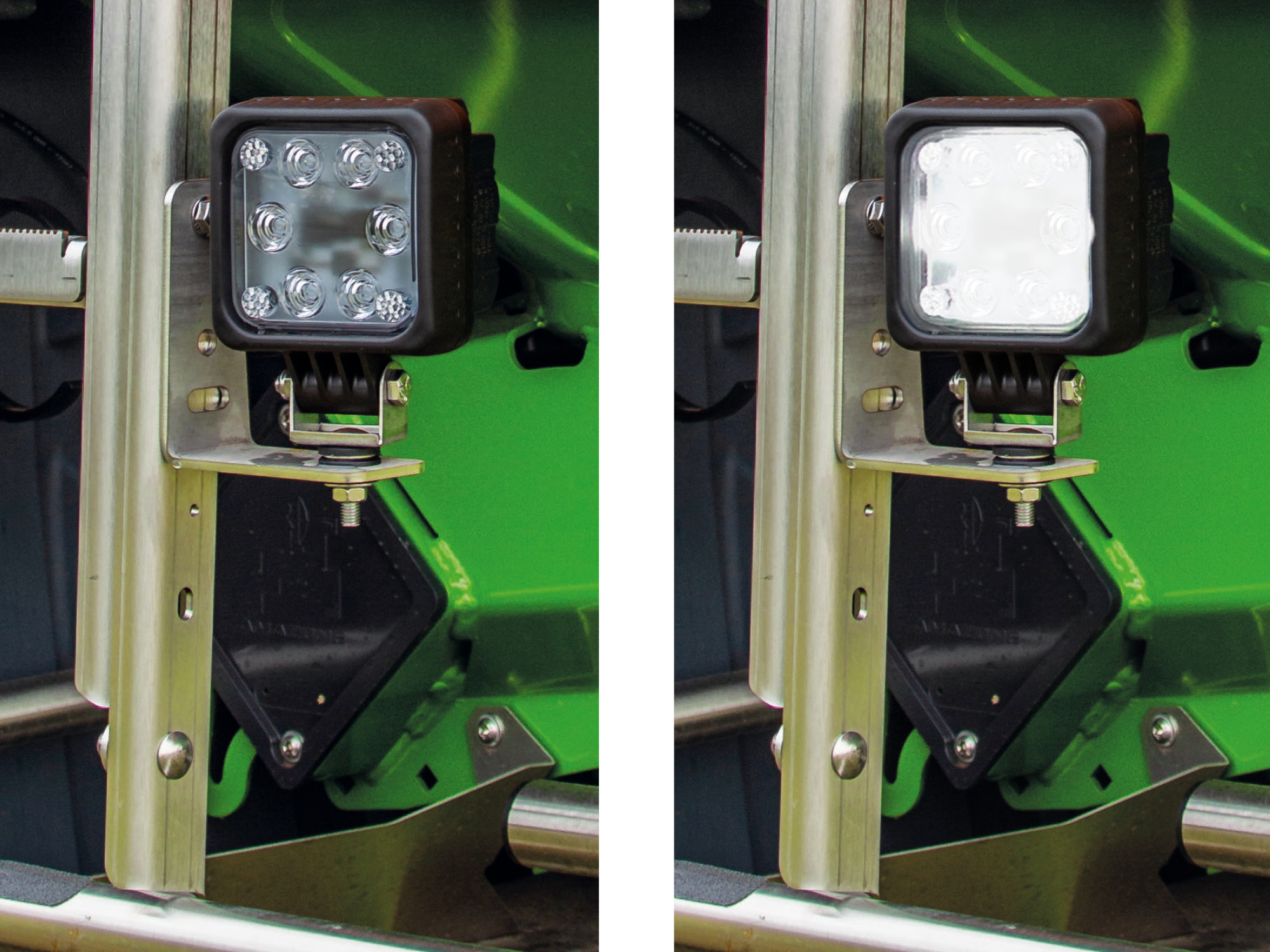 Filling aid in combination with the Profis weighing system 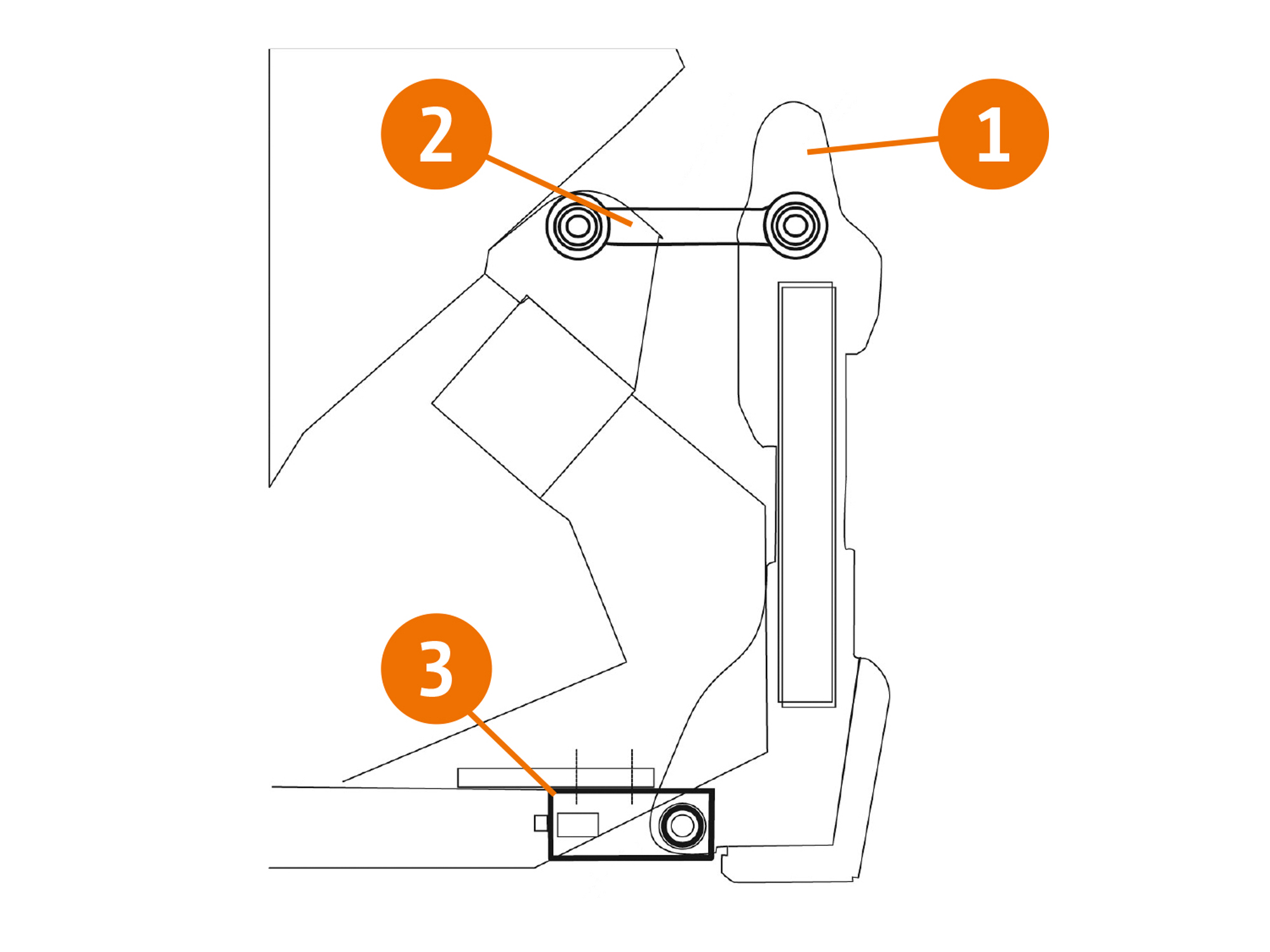 Any possible influences due to a change in the centre of gravity are taken into account on the Profis by the on-the-move signal from the tilt sensor. A twin-axis tilt sensor that assesses the front and back tilt as well as to the left and right, corrects measurement errors that may arise when going up and down hills or when driving across a hillside. 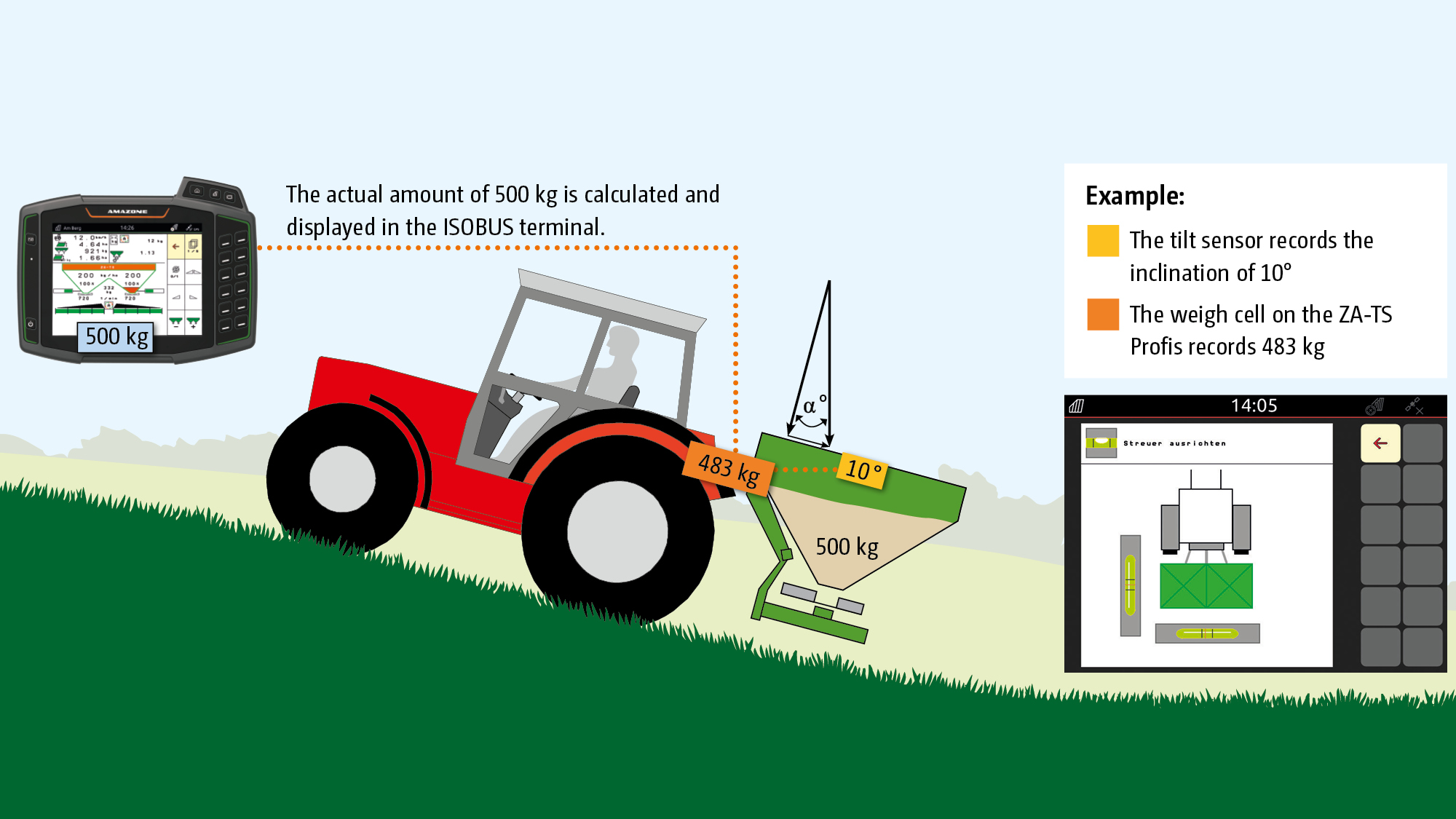 For simplifying the mounting of the ZA-TS onto the tractor in the horizontal position, the angle of the ZA-TS Profis is comfortably displayed in the ISOBUS terminal.
More information + Less information - 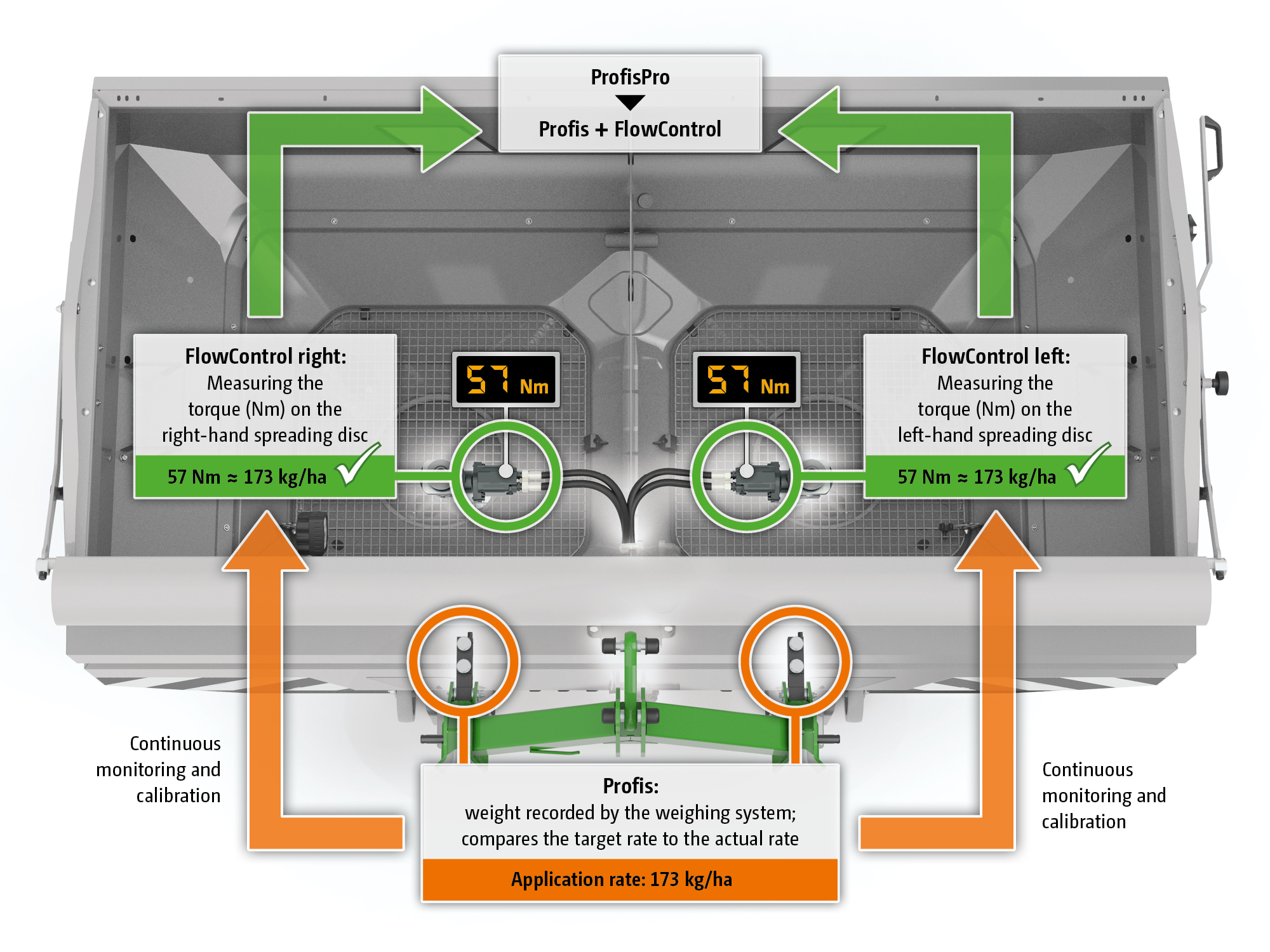 ProfisPro
The spread rate regulation between the Profis weighing system and the FlowControl sensors is a unique selling feature for AMAZONE.

ProfisPro for Tronic and Hydro
The intelligent ProfisPro weighing system is available for both the Tronic version with mechanical drive, and the Hydro version with hydraulic drive.

The correlation between application rates and the torque generated at the spreading disc at different working widths has been determined for all types of fertiliser on the basis of numerous spreading tests. Put simply: Low application rates generate less torque on the disc than higher rates.

FlowControl reliably monitors the torque on each spreading disc drive independently and can immediately adjust the position of the application rate shutters in the event of a deviation from the target rate.

In addition, the driver has an overview of the actual quantity remaining in the hopper at all times as well as the possibility to display the remaining travelling distance until empty.

The advantages
The right process for all conditions:

FlowCheck for monitoring the shutter apertures

AMAZONE offers the FlowCheck monitoring device for the ZA-TS Hydro series as an inexpensive alternative to FlowControl.

Whereas FlowControl can control and adjust the application rate independently to each side, FlowCheck only detects blockages and when one of the two shutter apertures is running empty. Should a blockage occur, both systems rectify the fault by quickly opening and closing the shutter slide whilst simultaneously reversing the agitator. This means absolute reliability of operation for the farmer.

FlowCheck sensors in the hydraulic circuit

Amazone offers ever more efficient and precise machines and processes, so that the agricultural sector can retain its competitiveness and future viability and operate more sustainably at the same time.

We need your consent

Precise spreading made easy – a digital, mobile test kit for the easy optimisation of the lateral distribution. Instead of using the test trays, as with the normal mobile test kit, the EasyCheck system consists of just 16 lightweight rubber mats and the EasyCheck App for smartphones.