The spreading disc drive – Mechanical or hydraulic, choose for yourself!

The spreading unit is driven via the PTO shaft on the Tronic version. In this case, the spreader is protected from overload, as standard, by a universal drive shaft with friction coupling. The input speed from the tractor PTO is transmitted via the central gearbox resulting in an increased spreading disc speed. This allows fertilisation at low engine revs across the maximum working width.

With the mechanically-driven spreaders, either 8 or 16 part-width sections are switchable, depending on the operator terminal.

The Hydro version makes operation possible irrespective of the tractor’s engine revs and with different spreading disc speeds. In this way, fuel is saved and a particularly comfortable and precise spreading is ensured. The spreader also operates at various different spreading disc speeds in border spreading, so that the best-possible lateral distribution can be achieved in the overlap area and in the field boundary.

Mineral fertilisers require particularly gentle treatment to ensure precise distribution and transport out to the crop over the total working width. Fertiliser, which has been damaged whilst going through the spreader, will not be precisely distributed.

As a safety feature, AMAZONE Soft Ballistic System pro is integrated as standard. The agitator, metering components and spreading discs are optimally tailored to each other. This protects the fertiliser and secures your yields.

The TS spreading system – Perfection in every component, just like clockwork

Composition of the TS spreading system

Characteristics of the TS spreading system

The agitator – soft-handling and gentle

The basic function of the agitator is to convey the fertiliser actively towards the outlet aperture so that a constant rate of fertiliser can be applied. Fertiliser lumps, which manage to pass the sieve, are, especially at low application rates, actively broken up via the star agitator which runs in the hopper bottom. If foreign objects reach the hopper tip and the agitator is overloaded, the electric motor reverses automatically in combination with the respective shutter and clears the fault. The perfect interplay of agitator and shutter is evident on the headland and in wedge shaped fields. As soon as a metering opening is completely closed, the agitator above it stops automatically. In this way the valuable fertiliser is protected from being ground up.

The benefits of electric agitation

"A 12V motor drives the agitator which rotates at 60 rpm. It switches off when the shutter is closed and it reverses as soon as a foreign object blocks the agitator."
(dlz agrar magazine – Long term test of ZA-TS 3200 Profis Hydro · 02/2017)

The delivery system swivels around the centre of the disc

The fertiliser is mainly deposited, via the delivery system, and thus in as gentle a manner as possible, at the centre-point of the spreading discs. The circumferential speeds are low at this point on the discs, and the fertiliser is handled very gently. For setting the spreading unit to different working widths and types of fertiliser, the delivery system is swivelled (concentrically) around the centre of the discs. The distance between the feed-on point of the fertiliser and the centre of the disc always remains the same.

The swivelling of the delivery system offers a wide bandwidth of possible working widths. A working width range from 15 m to 54 m is covered by just three sets of spreading vanes.

A spreader which, due to the high application rates and operational speeds possible, explores new dimensions in terms of work rates and which, of course, needs to perform extremely precisely at the same time, requires setting motors that function extremely quickly and exactly. Especially in applications, such as the automatic on/off switching at the headland or in wedges, spreading using application maps or with the continuous on-board monitoring (ArgusTwin and WindControl), the setting motors ensure the highest level demands are met.

Brush unit for a clean delivery onto the spreading discs

The bristles of the brushes which are fitted directly to the outlet apertures reach to the upper edge of the spreading vanes so that the fertiliser is safely delivered onto the disc.

If it is intended to spread a constant application rate it is necessary to match the size of the metering aperture to the prevailing operational speed. Thanks to the shutter slide, this task is fulfilled very quickly and sensitively. Due to the kidney-shaped design of the metering aperture, the spread pattern remains unchanged and precise, even at varying operational speeds so that the position of the delivery system does not require any adjustment.

The TS spreading discs: For the utmost precision at all spreading widths up to 54 m

Spreading system made from stainless steel – For a long service life

On the TS spreaders, the entire spreading system is made from stainless steel providing a long service life.

The vane change system enables the quick and easy change of just the spreading vane tips. The perfect solution, e.g. for agricultural contractors.

Between normal spreading and border spreading, different spreading vanes are activated via the so-called AutoTS system without the necessity to change spreading disc settings.

The spreading vanes are coated with a special long-lasting anti-wear protection. Consequently, the result is a three-fold increase in lifespan.

Optimum working width ranges of the spreading vane sets, depending on the fertiliser being spread: 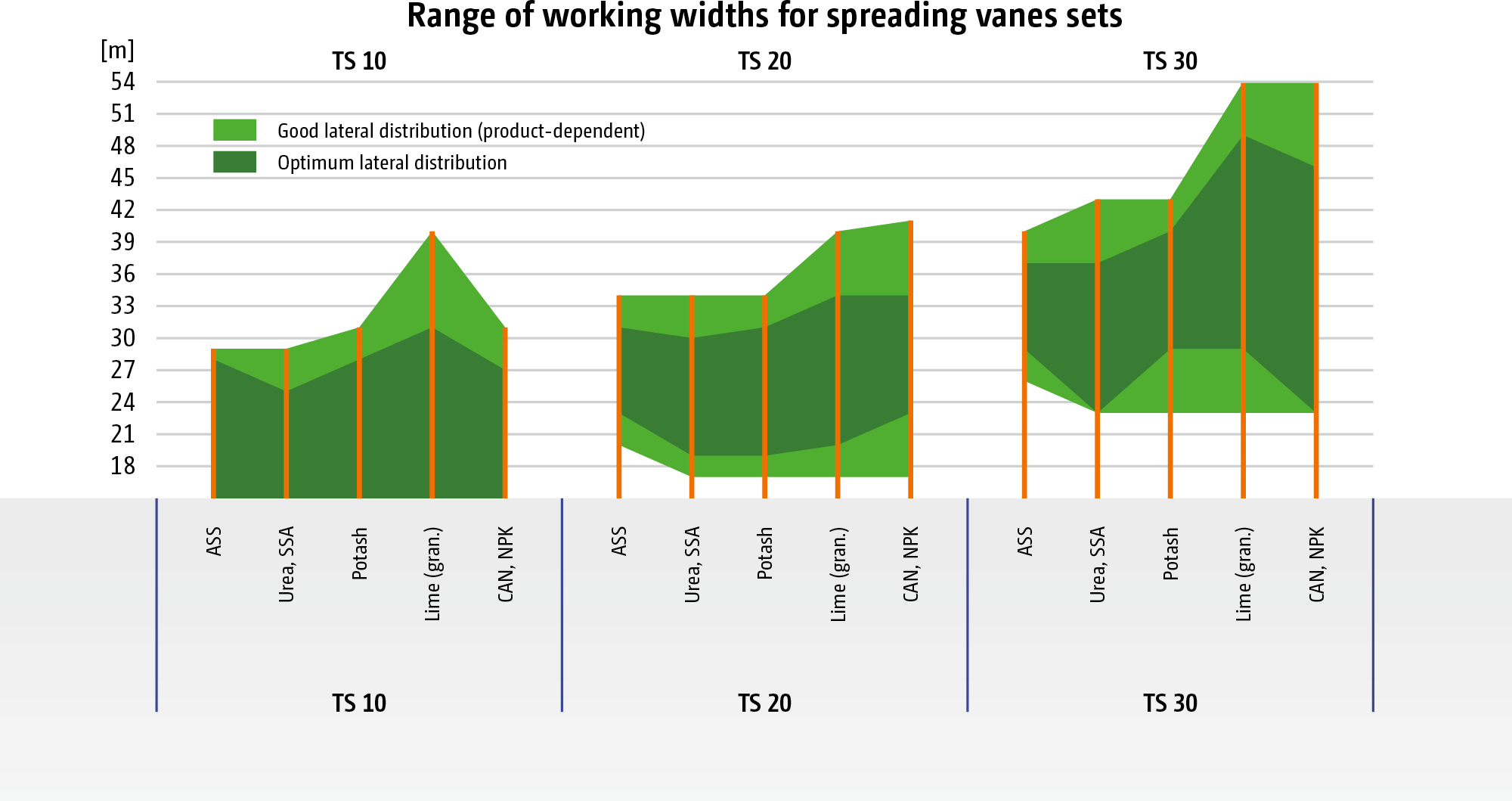 Via the adjustment of the delivery system, the feed-on point of the spreading material on to the spreading disc is changed and thus the spreading width and the lateral distribution are controlled. In addition, the working width can be set even more individually by changing the disc speed. 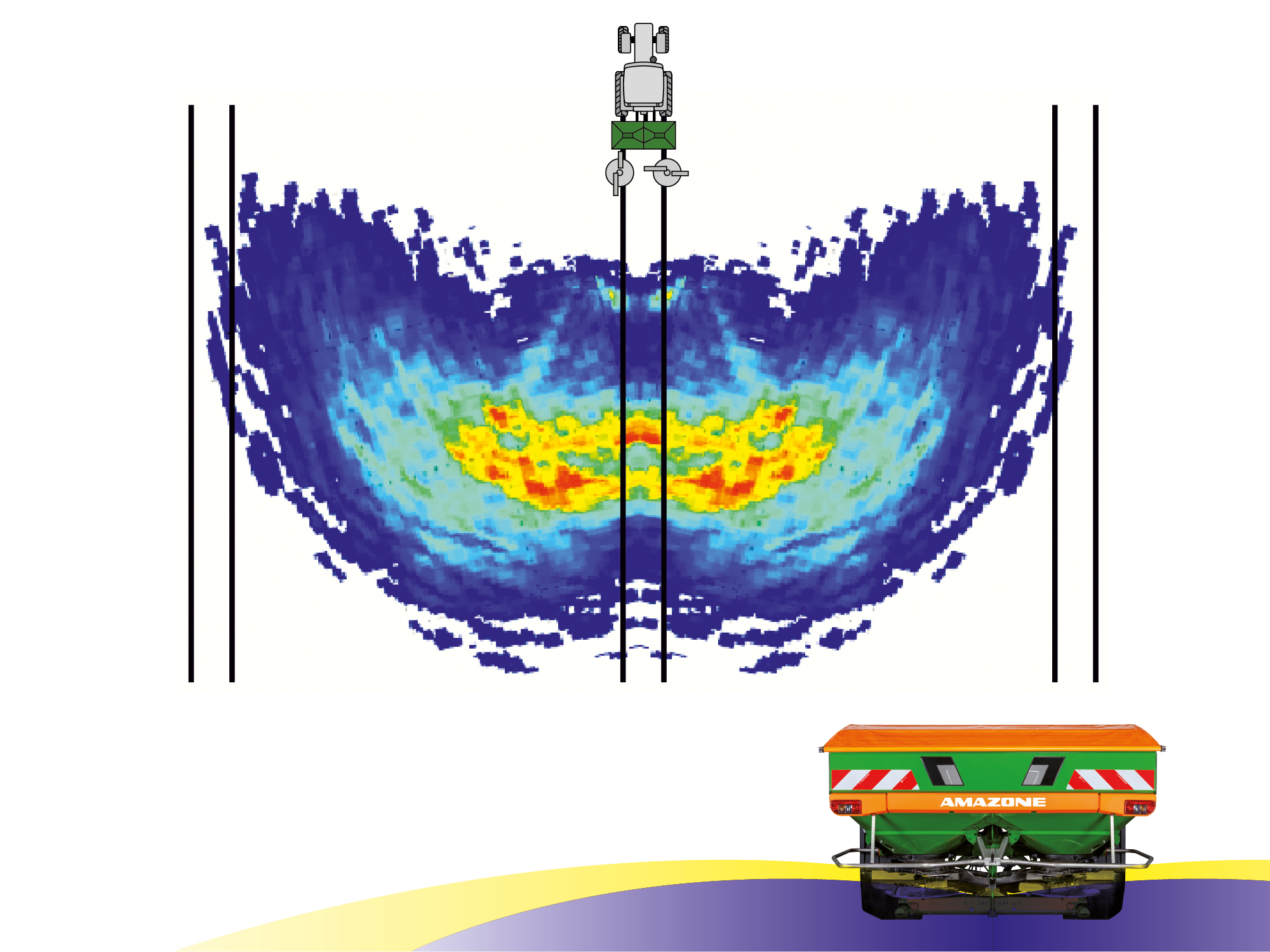 The spreading unit has been developed using three-dimensional spread patterns so that a perfect lateral distribution of up to 54 m working widths is achieved. The large overlap zones ensure a perfect spread pattern and are significantly more consistent with regard to any the external influences such as a side wind, change in topography, humidity and changing fertiliser qualities.

Amazone offers ever more efficient and precise machines and processes, so that the agricultural sector can retain its competitiveness and future viability and operate more sustainably at the same time.

We need your consent

Precise spreading made easy – a digital, mobile test kit for the easy optimisation of the lateral distribution. Instead of using the test trays, as with the normal mobile test kit, the EasyCheck system consists of just 16 lightweight rubber mats and the EasyCheck App for smartphones.